The SATE November course 2019 took place in Wil (SG) on 28 and 29 November 2019. There were 33 participants, who all took home a bagful of ideas on how to introduce acting techinques into their teaching. The course was taught by Nicolaia Marston, who works as a freelance actress and director and acting coach. With upstart entertainment Nicolaia launched the Shakespeare in the Courtyard series in the wonderful medieval(looking) Courtyard of the English Seminar at the University of Basel. So it was of course Shakespeare’s plays (mainly A Midsummer Night’s Dream and Romeo and Juliet) that we focused on, but there were also modern playwrights: Edward Albee, Caryl Churchill, Jennifer Haley. The moving and a little disturbing play The Nether by the latter was very much in the centre. We did a lot of practical work as you can see in the pictures! And we enjoyed several meals with each other, above all a very pleasant communal evening meal at the restaurant L’Olivier. For one of the most important characteristics of the SATE November course is that you meet other teachers - a very social affair.

35 teachers attended this stimulating and wide-ranging workshop given by the Irish writer, Elaine Feeney. The aim of the workshop was to show how poetry and 'fiction poetry' (prose poems) can be used in the classroom with 'reluctant teenagers', to use Elaine's phrase. Emphasis was placed, not only on which types of material can be used, but also on how teenagers themselves can be encouraged to show their creativity and to develop their critical faculties. Participants were sent a number of texts in advance, which were then discussed during the workshop. Elaine also brought along a short story by the Irish short story writer, Claire Louise Bennett. So no lack of reading matter!

After a brief introduction Elaine got us to write a short letter to our 16-year-old selves in order to encourage empathy with our students and to imagine life as a teenager – an interesting trip down memory lane! Then, after discussing the question of which topics poetry should or should not deal with, she introduced us to some spoken word or 'performance' poetry, viz.

All three of these powerful poems are available on YouTube, and it was an interesting and sometimes moving experience to listen to the authors reading their poems. In one case (From This Day) the poem was accompanied by fast-moving visuals (cartoons), which some participants, including more 'mature' participants like myself, found somewhat distracting, but Elaine assured us that the younger generation (she teaches teenagers herself) can cope with the rapid, multi-media approach. Certainly all three poems are highly topical and would be suitable for use in the classroom.
We then turned to some more complex 'page' poems: Feel Free by Nick Laird, The Artane BoysBand by Jess Traynor (both read by the authors), Aubade by Ocean Vuong (accompanied by footage of the Vietnam War), and the prose poem I loveYou by the Trinidadian poet, Vahni Capildeo. The poems were syntactically and lexically highly demanding, which led to a discussion about the choice of poems and the level of difficulty. Elaine also spoke about the question of how to introduce teenagers to poetic form. We were then divided into groups of six and given a "hat" or category by which to judge all the poems. For example, each person had to examine the poem according to how it displayed aspects of logic, emotion, optimism or creativity. One person had to play the 'devil's advocate' (putting forward counter- arguments), while another person had to 'manage' the discussion. We were then asked to rate the poems according to our "hat". Finally we were asked to decide which was the 'best' poem. An interesting exercise which makes the reader look at a poem from various perspectives.

In the following session Elaine set us an interesting task. She asked us to think of a powerful early memory, to jot it down, mentioning sensory details (sight, sound, taste, smell, touch), and then to retell the memory to our partner. The partner's task was to take notes and then to retell the memory in the form of a short poem. Elaine's point was that, apart from encouraging creativity, the exercise forces students to listen to one another and fosters mutual respect in the classroom. Certainly I was highly impressed by the quality of the 'poems' that were produced. Obviously there is a lot of hidden poetic talent among SATE members!

The next session was entitled "Poetry in Fiction". Elaine pointed out that poetry and fiction are merging to some extent in contemporary literature, a remark which reminded me of Robin Robertson's recent verse novel The Long Take (shortlisted for this year's Booker Prize), a highly original mixture of poetry and prose. Elaine said that when she wants students to write fiction, she starts with the background and gets the students to describe one or two people they know (age, height, family status, job, positive traits, etc.). She then goes on to setting (preferably something students are familiar with) and then plot. Our own poetic fiction task was based on Nicole Flattery's story "Track", which we had read before the workshop. We worked in pairs, with one person acting as a psychologist/therapist, who had to offer advice to the troubled female character – an interesting exercise in identifying with characters in a story.

The final session was devoted to discussing the style and content of the short story "A Little Before Seven", taken from Claire Louise Bennett's collection of stories Pond, the shortest of which runs to a few sentences! Although interesting, many participants felt that the somewhat abstruse nature of the story might make it unsuitable for use in the classroom, though others disagreed.

To sum up. A rich, stimulating workshop, given by a gifted teacher and multi-talented writer (her first novel will be published in January 2020). Elaine Feeney's combination of intellect sharpness, eloquence, passion for literature, charisma, warmth and humour meant that the course was both rewarding and highly enjoyable.

This was her first visit to Switzerland. We are sure it will not be her last.

Dewi Williams (on behalf of the SATE Committee)

Using (Contemporary) Novels and Short Stories in the Classroom

This 2-day workshop, which was organized by Hansueli Müller and Dewi Williams, was attended by 29 teachers and run by the young Irish writer Alan McMonagle, who has published two volumes of short stories (Psychotic Episodes and Liar, Liar) and a recent novel Ithaca, which was longlisted for the Desmond Elliott Award for first novels . Participants were required to read Ithaca before the workshop and were also sent a file of material which included some short stories from his two collections. Just as Odysseus is determined to return home to Ithaca, the 11-year-old narrator of this darkly comic novel (set in a small town in central Ireland) is determined to find the father whom he has never known. The novel is both poignant and humorous and gave rise to some animated discussion. Alan dealt with themes such as the young narrator in fiction, the contrast between short stories and novels, the role of fantasy and myth, the importance of character and language, etc. He also read from some of his (often amusing) stories.  All in all, a stimulating and enjoyable workshop. 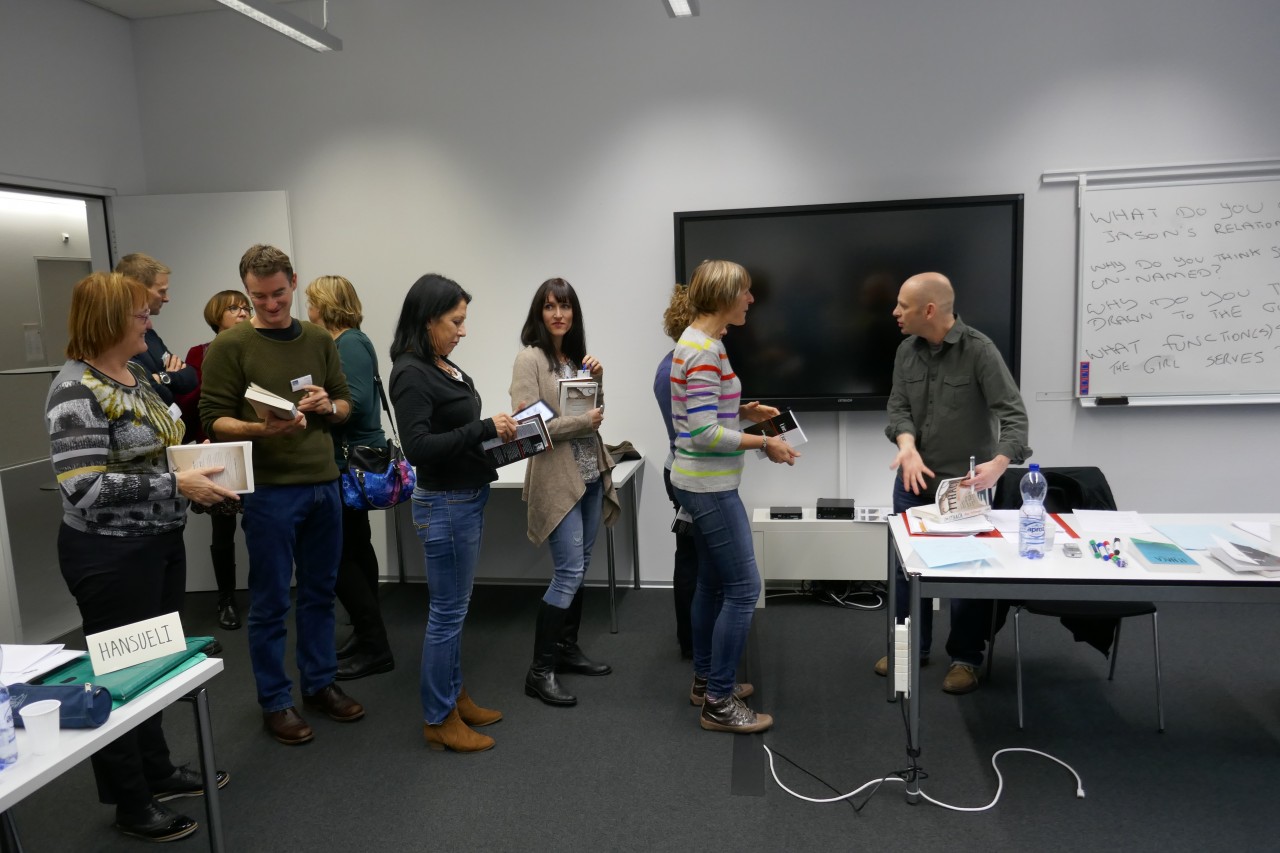 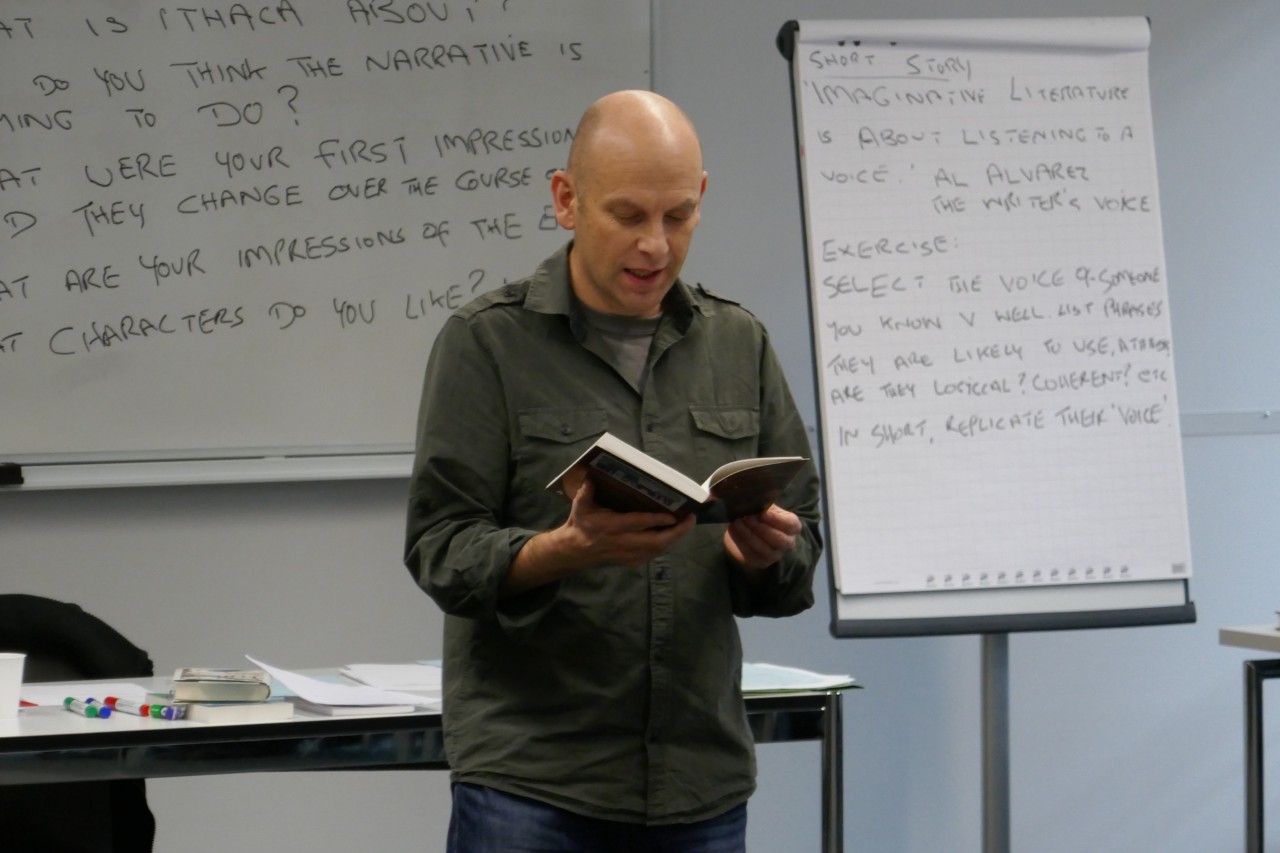 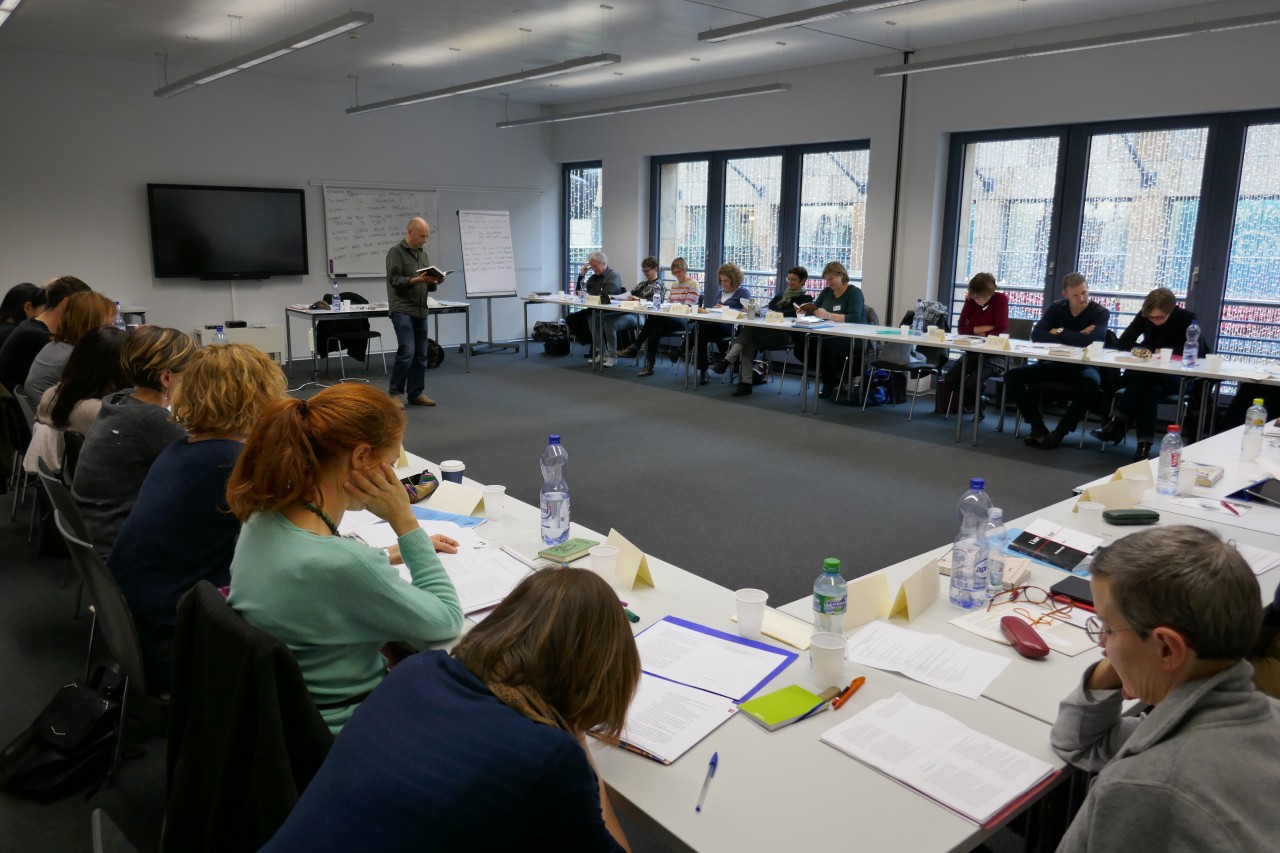